I ordered this set for myself around last Christmas and its super adorable!

The Guidebook is wonderfully illustrated and mine was not the most current version but later on when it was updated, Fangamer sent out an email later to everyone who had previously purchased to let them know there was an updated PDF for them for free or a coupon for if they wanted to update their physical copy.It was unexpected and I greatly appreciated it as the new patch had dropped by that point!

There was an issue at the time of purchase as bundles were being sold really fast and parts of the bundle sold out before others but you could still purchase the bundle. The Keepers of the Forest T-shirt was sold out in the size I selected but their customer service was very nice in letting me know as fast as possible and I got to pick out a substitute which I appreciated.

Everything came in great and I'm more than happy with the Junimos and the tote bag as well!

I got this bundle for myself. It arrived much quicker than I expected, and all of the items are of great quality. I'm very happy with my purchase, and look forward to making more with this website. 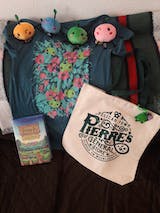 2 reviews
Loading...
We're out of stock, but give us your info and we'll send you one email when this product is back in stock!

Pick up some of our best selling and newest Stardew Valley merch together and save $16. This combo includes:

Each item is also available separately!